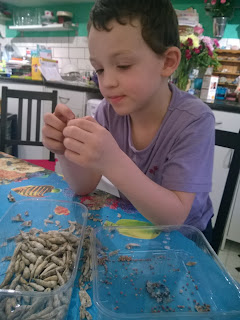 We finally had a break in the rainy weather on Friday to go to the allotment and re-line the leaky pond.  This was great fun, and done with minimal disturbance to the one sleepy frog we found at the bottom of the pond.

Afterwards we turned to a final harvest of leeks and spring onions, and clearing the plot of things that needed to go.  One of these sections to clear was mainly radishes that we had let run to seed because the pods are heavier cropping and in my estimation tastier than the more usual crop of the radish root.

The juicy green pods were by now papery shells, which the boys were completely fascinated by as I broke some open and showed them the seeds.  Ollie kept repeating over and over "we can sow seeds, make new seeds, and sow those again" in an obsessive way that made me realise that he had just had a light bulb moment of putting together things he knew.  He knew we bought seed and sowed it to produce a crop.  He knew that plants make flowers, which get pollinated and make seeds.  But he hadn't gone that extra step to link it all together.

Could we keep our seeds? Of course we could.  I guess the optimal conditions for collecting seed to store are probably to harvest dried pods at the end of the Autumn, but with our mild wet winter the pods had still been green until recently, so the opportunity hadn't presented itself before. 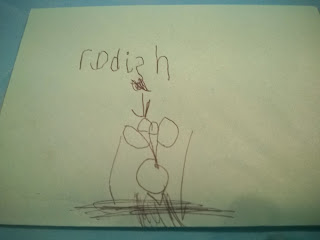 The boys picked a sandwich bag full of radish pods, which we took home and then spent the evening opening and sorting.  I showed Ollie what a good seed looked like, and how some of the seeds were tiny and underdeveloped, or squashy, or moldy and that we needed to discard these.  We talked about how the scientists we had seen at the Millenium seed bank at Wakehurst Place checked and sorted all the seeds for storage.  We talked about the best conditions to store seeds - cool and dry - and why warm, damp conditions would cause the seeds to sprout or rot.

Ollie wanted to know how the seed companies we buy seed from clean and sort out their seeds, he quite rightly pointed out they couldn't do it the way we were as it would take too long.  So we sent a Facebook message to Thompson and Morgan, who replied that seeds were sent to their lab to check which ones would grow, and that they had robots for putting the seeds into packets.  We looked on YouTube for a video of this process, but came up blank so have messaged the documentary series How It's Made to ask if they have ever covered it.  Fingers crossed they may have an answer for us at some point, although T&M seeds have definitely got the record for speediest response.

Finally we chose an envelope and Ollie labelled it with it's contents (he's working out spellings for himself now, but going through quite a lot of letter reversals, hence the backwards a and s).  He very proudly added it to our seed box as I noted it on our inventory with sowing dates (last year I forgot about several packets of seed, so this year I got organised and made an inventory).

As to whether or not our saved seeds will grow - I suspect it's not going to be a problem either way as we dropped so many pods on the soil that we'll be in for a bumper self-sown harvest in a couple of months anyway, but it would be nice if Ollie really can achieve his new dream of a perpetual crop of sowing, growing, saving and sowing.
Posted by Unknown at 12:32

Email ThisBlogThis!Share to TwitterShare to FacebookShare to Pinterest
Labels: gardening with kids, horticulture for kids, kids on the allotment, seed saving